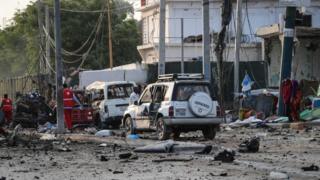 Reports reaching out had it that the death toll from last Friday's bomb attack near a popular joint,known as Sahafi Hotel has risen to 50,while about 53 persons were still missing. The hotel owner,Abdifatah Abdirashid was also killed in the attack.Abdifatah who was a businessman took over the running of the hotel after the death of his father Abdirashid Mohammed who died in a similar terror attack few years back. Most of the people affected were said to be civilians who were passing by the area at about the time of the blast.